My $8 Front Porch Spruce Up

My front porch was looking a bit sad.  There was something gooey stuck on the tile that I'm sure was grody-ness leaked from the trash being taken out and I was using it to paint furniture so there were tools, tables and furniture strewn about, garden gloves, etc.

I don't always bother with the 'before' but here is my $8.00 Front Porch Make-over!  It was simple, inexpensive and really didn't take too long.  The part that took the longest was scrubbing down the eaves and windows and tiles, so now they are sparkling clean again.  I always think it is a bit sad to go to someones house and the front porch is dirty.  I don't know why this bothers me more than a completely destroyed house with a sink full of dishes, but it does. 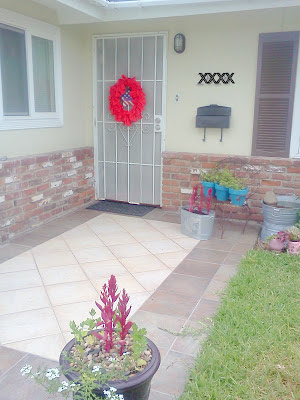 The idea was that I wanted to change out a few things for summer and I go with the good ol' red, white and blue from Memorial Day until Labor Day.  So the first thing I did was make a pool noodle wreath.  Here was my inspiration photo from Pinterest (click on it to go to the source) and below is my actual wreath.  Total cost for the wreath was $4.00.  I used red felt, a pool noodle from the dollar store and the freedom sign was from the dollar store also.  The source link is a great blog and has all of the instructions.  She used red burlap, but I couldn't find it, so I just went with felt and it looks good to me! 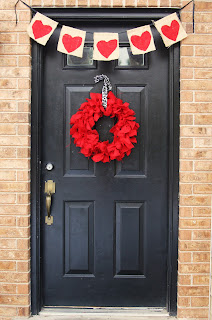 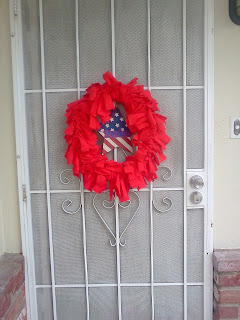 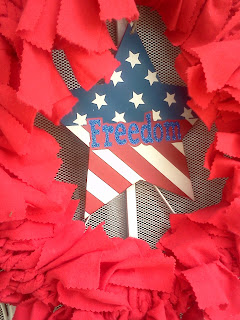 Next up, I looked around to see what I had that would work in the color scheme as far as plants and pots go.  I had three elephant bush cuttings that were in blue pots so I moved those from the side yard onto the rusty wire bench.  (Zero cost, love that!) 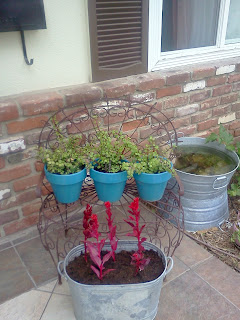 Then, I realized I had this great galvanized container that my nephew had brought me from a  yard sale.  I took out my hammer and 1 big nail and poked holes in it for drainage.  (Note: this is really loud!  So don't pound on galvanized metal early or late at night.)  I filled it up with leftover potting soil, some composted rabbit manure and whatever else I had on hand.  I wasn't too concerned with this soil lasting for years, it is just for a few months with seasonal color.  I purchased a 6-pack of Celosia for $1.72.  I chose those because they look like red fireworks and should last all season long.  When I chose the 6-pack I chose one that had more than 6 plants in it and just carefully separated them.

I also re-potted a dark colored planter I had out back that I used as a sort of garden trash can.  Now I don't have a garden trash can, but I do have a cute potted arrangement for summer. For this I purchased a 6-pack of flat parsley. You can never have too many herbs on hand and I use parsley quite a bit.  I used 3 Celosia's, 5 parsleys and one plant I don't know the name of that was in another pot in the backyard.  Again, the un-identified plant was white and the celosia was red, so I was reinforcing the red, white and blue theme. 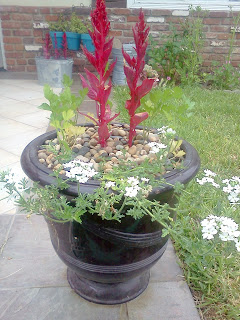 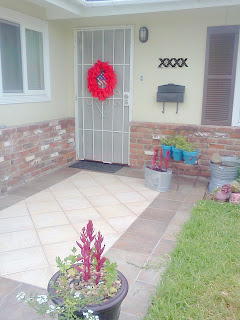 What are your plans in the garden or home this Memorial Day?

P.S.: if anyone knows how to re-paint or remove security doors, let me know.  I hate having them on the house but years ago everyone in my neighborhood was suckered into buying them after a single burglary by a very slick salesman.  And now, they don't sell the tool to take them off at the hardware stores anymore because people were buying the tool to break into houses.  The only way that I know of to get them off is to pay someone and that is NOT happening.  My security door hides all of my hard work repainting my front door chocolate brown last year, and let me tell you repainting a front door takes a ton of work!